If you stuff yourself full of poems, essays, plays, stories, novels, films, comic strips, magazines, music, you automatically explode every morning like Old Faithful. I have never had a dry spell in my life, mainly because I feed myself well, to the point of bursting. I wake early and hear my morning voices leaping around in my head like jumping beans. I get out of bed to trap them before they escape.
RAY BRADBURY Be daring, take on anything. Don’t labor over little cameo works in which every word is to be perfect. Technique holds a reader from sentence to sentence, but only content will stay in his mind.
JOYCE CAROL OATES

Recently I have had the pleasure of working alongside authors Mary Bradford and Marie O'Halloran in compiling a new anthology for our writers group. This anthology is a collection of stories and poetry from the Charleville Writers Group. Based in County Cork, the group has been formed for a number of years.
Members have enjoyed publishing success with their work so it was decided to put a collection together to bring awareness of the group to the local community.
In doing so we decided that a percentage of the sales of this book should benefit a local charity. Because of the important work they do in the Charleville area we felt it was important to support the local Suicide Awareness Project.
Formed in 2008, the aim of the Charleville Suicide Awareness Project is to develop and implement a community development approach to address the issue of suicide in the Charleville community.
The project acts as a resource to raise awareness within the community and promote the development of initiatives to support suicide prevention, intervention and postvention.
The project will work in partnership and with the support of the local community and support agencies.
The project works under its own mission statement:

To educate, inform and support the Charleville community
on the issue of suicide. 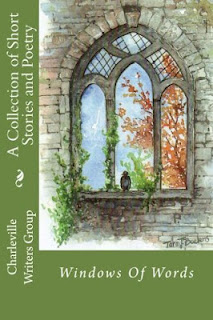 Our anthology is titled Windows of Words and will be officially launched at the Culture Night in association with Cork County Council Arts Office on the 21st September 2012 at our local library.


The Charleville Writers Group wish to thank the artist, Tara Boelens for the use of her painting on the cover of this book. We would also like to acknowledge the staff of our local library, Barbara, Josephine, Michéal and Dominic, for all their support in accommodating our meetings and the many cups of tea and coffee.

Finally thank you to the contributors and to the sponsors of our refreshments we received on the night of the launch of this anthology.