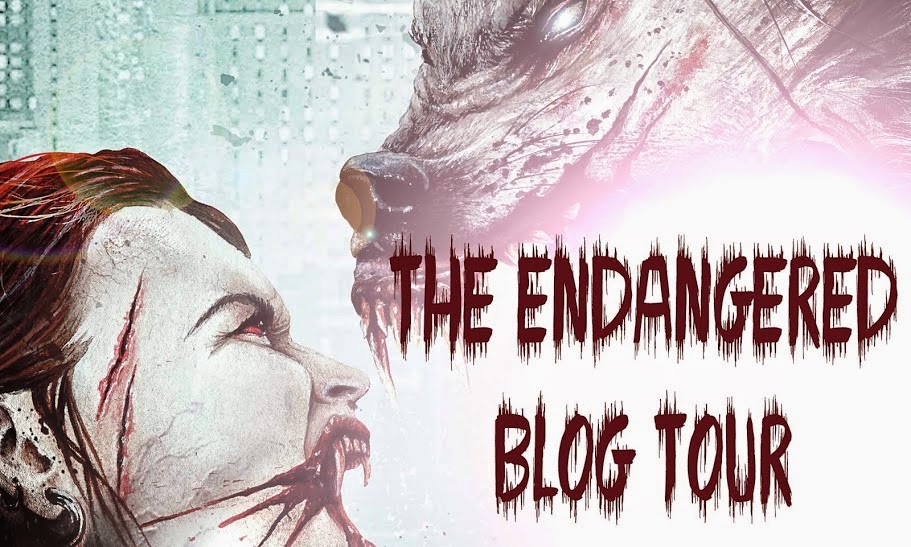 It gives me great pleasure to welcome S.L. Eaves to my blog today for the launch of her novel The Endangered.

Luthando Coeur is pleased to announce the upcoming publication of The Endangered, by S.L. Eaves on Sept. 4. This is a fast-paced fantasy action tale which shifts between the contemporary urban settings of New York and London.  Eaves combines a knack for relatable dialogue with a tremendous premise to bring forth a remarkable piece of writing.

S&D Industries is a prominent pharmaceutical company based in New York.  It has, for many years, appeared to exist only for the benefit of humanity, and this year's chief product seems no different.  The company's CEO, whom we know only as Striden, announces the imminent delivery of a powerful flu vaccine. The true purposes of S&D are anything but philanthropic, however.  The newly-engineered drug does not protect against flu.  It turns people into werewolves.

The only group which stands a chance of resisting this change is a population of vampires.  The foremost of them, who go by the name of The Endangered, are determined to turn back the mass werewolf infestation.  Among them are an ambitious rebel named Catch, and Lori, Catch's newly-turned protege.  Catch has brought this treacherous world to Lori's doorstep and both their worlds are turned upside-down in the process.  Secrets are exposed, alliances are formed.  Blood is spilled as the vampires must do everything in their power to preserve both their own kind and that of their food supply.

S.L. Eaves' background is in marketing, primarily in media and publishing industries. She enjoys 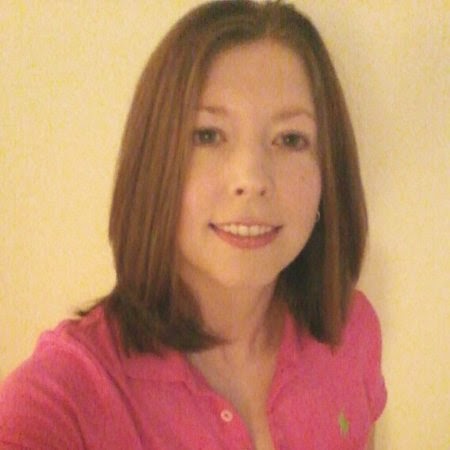 being in an environment that promotes creativity and challenges her to apply her film and writing skills to generate innovative marketing campaigns.

Outside of writing, she's an avid sports fan and concert goer who enjoys running and biking in her free time and readily confesses to being bit of a film and television junkie. When home, she's never without a book in arm’s reach.
The Endangered is her debut novel and is slated to be the first in a new series from Zharmae Publishing Press, with the sequel scheduled for 2015.

So who is ready for an excerpt?

"Drive Faster."
80 ... 85 ... 90. The pedal vibrated under my foot.
"I'm pushing a hundred. These winding roads make it hard.”
Crina climbed over the front seats and settled into shotgun. She'd been taking care of Xan, who was unconscious in the back.
"How's he doing?"
"He took one hell of a blow to the head, but he'll be okay."
I turned up the radio to drown out the sound of the police sirens behind us. My eyes kept darting to the rearview.
There were two of them back there. At least.
They'd caught our trail while we were tearing through the city. You could say we had a police escort out of Los Angeles.
"How far till Mexico?" Crina was wiping blood off her hands.
"Far. Dunno. At this rate we're not gonna make it."
"Where the hell are we anyway?"
"Somewhere mountainous,” I responded dryly.
"You shouldn't be driving. You lost a lot of blood."
"Well right now that’s the least of our problems."
I’d hotwired an old 90s roadster while Crina was hoisting an unconscious Xan through the hatchback. An easy steal, but the old beast of a transmission was fighting me on every turn. It was a miracle we’d made it out of the city at all.

Headlights glimpsed the guardrail. We hit a sharp curve, caught some stones in the tires and skidded through the gravel for a spell. I gripped the wheel tightly, downshifting. Crina clawed the dash. Xan remained sprawled across the backseat. We fishtailed, then straightened out.
I shifted gears and kept my focus on the road ahead.
The speedometer climbed back over 80 mph. Crina shot me a nervous glance.
"Just keeping the cops on their toes."
"They'll be sending out back-up and lots of it… likely include a chopper. We
aren’t going to make it much farther in this car. We gotta bail."
"Yeah..."
I hate when she’s right.
Crina rolled down her window and released her seatbelt. I followed suit.
"We should've stolen a convertible."
I grinned, “Next time.”
"There's a ravine nearby. I smell the water."
There was a valley down to our left, a fitting host for water. And our escape.
"Something to aim for. What about Xan?"
An over-confident Crina was halfway out the window, she ducked back in.
"Can't toss him. Gotta pull him from the wreckage.”
My stomach churned. Not what I wanted to hear. Cops were still in tight pursuit. They would not be relenting anytime soon. Someone blew apart several blocks of downtown L.A. and we presently carried the titles of Suspect One, Two, and Three.
Our options were limited at best. There was a tight bend up ahead.
"Get ready to bail."
My foot slammed the accelerator. Crina climbed most of the way out the window, bracing her feet on the door handle.
"See you at the bottom," I promised Xan under my breath.

The road curved sharply to the right.
We didn't.
The car went airborne and we ejected mid dive over the rocky and tree filled terrain. From my own airborne position, I watched as the car clipped the tops of a few trees and nosedived into the jagged landscape below.  Its short-lived plummet was followed by a dramatic landing as it bounced into tree trunks, flipped over laterally and eventually rolled to a stop.
I had similar luck.
My feet struck the ground, but I didn’t stick the landing. Hurling forward over some rocks, I bounced along the mountainside until a tree brought me to an abrupt halt. Still conscious, I lay at its trunk watching the world spin.
Ouch.

Stumbling, I forced my feet to keep me vertical. My head was spinning. I staggered towards the light supplied by flames now emanating from the pile of metal and gasoline that used to be a car. My eyes started to focus as I neared the overturned vehicle.
"Xan," I coughed, holding my rib cage.
Had that fall not jolted him awake? Lucky bastard.
I looked around. No sign of Crina.
Hastily, I pried back the driver's side door and was relieved to see Xan inside, still unconscious. The fall had tossed him onto the foot well of the back, but he seemed no worse for wear.
Folding the driver’s seat forward, I climbed in and slipped my arms under him. Grasping his underarms, I slid him out from the burning car. Crina caught me as I fell back under his deadweight. She pulled us both to safety, beating out my pant leg which had caught fire in the process.

We took shelter in some dense underbrush. From there we could see the police cars up the hillside. They were parked, headlights beaming out across the night sky, illuminating the treetops. I caught the silhouette of an officer as he crossed the front of a car. We couldn’t spot anyone making their way downhill. Perhaps they were waiting for fire truck or a medical unit.

"How are you doing?"
"Okay. Caught hold of a tree branch mid flight. Made for an easy descent. You?"
"Had a kinda rough landing. Maybe a few cracked ribs."
Xan began to stir.
"Xan!" We both exclaimed.
"What happened?" his voice was horse and weak. I bent down to hug him.
"Lori!" He wrapped his arms around me and stayed clenched as I stood up. I grimaced at his weight on my half-eaten shoulder. Crina took his arms from my neck and helped him to his feet.
"You sure you can stand okay?" She asked. He was looking around.
"Where are we?"
"Somewhere outside LA." I muttered, bracing myself against a tree. I looked over at the car a few yards up the hillside. Cops were shining their flashlights around, but they didn’t quite have the range. The car was completely engulfed in flames.
"We have to keep moving," Crina said, "I lost my comm a ways back."
"I have mine." I popped it out of my ear. It looked intact. I tapped the button, stuck it back in. Not even static.
"Nothing."
"Damn."
.........
We continued downhill. Crina had been right. We trudged along the crooked path cut by the river, crossing when it narrowed. It wasn't long before we were out of range of the sirens and lights.
Darkness.
Silence.
Both were refreshing.
Crina led the way, hacking through the foliage. Xan and I stumbled along behind. A good hour passed. None of us spoke much. I felt dizzy, nauseous, exhausted ...
Eventually we reached a clearing.
"Break time." I proclaimed, dropping flat on my back, letting the soft earth break my fall. Crina and Xan joined me.
We lay there taking in the beautiful, crystal clear night sky. And a full moon, apparently, illuminating the field around us.
"Full moon tonight. Amidst everything I’d forgotten."
"So had I," Crina sighed, "Ironic now, I suppose."
"Where is everyone else?" Xan asked absently.
"That's a good question."
I reached into Xan’s cargo pocket, fishing around.
“Feeling frisky,” he joked. I removed my hand, displaying the cigarettes and zippo he’d been holding for me.
“Oh, right,” he laughed as I winked at him.
I lit one. The sensation of smoke filled my lungs.
Crina reached across and slid one from the pack. She didn’t smoke, I didn’t comment. Just flipped open the lighter. I gave them back to Xan, who hadn’t moved since our collapse.
“And yet you still managed to start a fire,” Xan played with my zippo. He took a cig from the pack, now resting on his stomach, and craned his neck to light it.
After a moment.
"Does this mean it's over?" Crina was propped up on her elbows.
"I don't know."
She craned her neck for a better glimpse at the moon.
Xan groaned. "My head is splitting."
I reached out and ran my fingers through his hair.
"My head ... is full of static. The comm!"
I sat up with a jolt. Hand on my earpiece.
Static came over my comm, followed by a faint voice. I couldn't make it out. My ears were still ringing from the blast. I handed the comm to Crina.
"Thought I heard a transmission. See if you have any luck."
Crina put the piece to her ear. Pushing the button in.
"Hello. Anyone hear me? Hello."
I closed my eyes, relaxing on the moist earth. The blades of grass pricked my skin. It was a warm night. A perfect night.
It was not enough.
I had heard a voice over the comm. A voice that sounded like Catch's.


So where can I get my hands on The Endangered?
Direct From Amazon
Barnes & Noble