I spent last night asleep on the floor of the Accident and Emergency department. 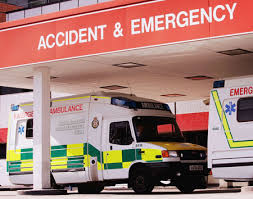 I spent last night asleep on the floor of the Accident and Emergency department.
No, this is not a line from one of my dark fictional pieces it is true. Our local GP advised us to take our daughter to the hospital after a visit to him. She was suffering with dizziness and a loss of balance; he said that in eight years he had never seen it this bad in someone so young.
Many doctors saw her and they decided to keep her overnight for observations. The hospital was so overrun that it was 1am before we were given a trolley for her to sleep on overnight, as a bed was not available in the children’s ward, eleven hours after we first arrived. A&E is not designed to keep people long-term, only one parent is allowed to stay with a child, causing much upset with many of the other parents. My wife went home as I said I would stay with out daughter overnight. I had a choice of a chair that was not designed to be sat in for any length of time, never mind sleep in. After an hour or so, I opted for the floor. There I was lying on my daughter’s dressing gown, with a jumper rolled up as a pillow and my jacket as a blanket; it was a long cold night.
When morning came, my daughter was one of sixteen children lying on trolleys waiting to be allocated a bed on the wards.
This piece is not a moan at the conditions my daughter or I had to put up with, but as an admiration for the nurses and doctors of that hospital.
The department is under staffed and budgets have been cut beyond belief. The A&E department was so overrun by patients, all I could do was watch as the small number of nurses ran around from patient to patient; trying to do way too much for any human being in any working environment.
Adults who had been there for hours giving up their seats for those who needed it more, a real spirit formed between many. Unfortunately there was also those who believed they were the only people there and wanted all the attention of the nurses. Funny enough these were the people the doctors did not require to stay overnight.
My daughter ended up staying two nights, we moved from A&E to a day ward, and eventually on to a children’s ward. However, her journey did not end there, as the next night of A&E patients were now lining up for beds. We were asked if we would mind moving again, this time to the children’s day ward. They needed more space for a few sick babies; my daughter was not bothered about being moved so we did not mind.
As we passed from ward to ward and met many nurses, all they could do was apologise for the situation, it was not their fault, they were in no way to blame. Every one of them we met were still so pleasant and helpful, a wonderful credit to the nursing profession when you considered the conditions that they have to work under day after day.
Posted by Daniel Kaye