Once again I was delighted to receive a message from author Nola Sarina asking me to review her new novella Phantom Nights.
Phantom Nights is the third in the Vesper series and I have to say after reading the first two, Gilded Destiny and Jaded Touch, I was really looking forward to this latest addition to the series. You can follow these links if you want to read more about them.

Samantha Murphy isn’t afraid of the hallucinations that plague her nights. Phantoms aren’t real. They can’t hurt her. But then she meets a phantom who shakes her faith in her own psychosis: the impossibly fast and charming Sychar. He’s a Vesper... enslaved by a dark master and forbidden to consort with humans.

My Thought on Phantom Nights.

All I can start with is WOW Nola Sarina does it again!!
This is a very well written novella that I found impossible to put down. The characters came to life in
a way that I could not believe. I really enjoyed Nola's first two novellas but this was something else. I won't go on, but I will leave you with one of my favorite lines...

'I hated the grim acceptance in his voice, the way he loathed his own existence
yet could do nothing to change it.'

I always knew I was crazy.
Most people probably think they’re crazy at some point or another... when they make assumptions about others that turn out to be false, or when a scorned lover calls them paranoid. But that’s not the kind of crazy I mean. I’m seriously crazy. Full-blown, see-things-in-the-dark, batshit nuts.

It started with window phantoms when I was a child. I couldn’t look out the windows after dark for fear of the faces I’d see staring back at me. No one else saw them, but I knew they were there. Vacant, black eyes sunk into pallid skin, beckoning me soundlessly through mouths open so wide it couldn’t be real.
Yet I saw them anyway. And while it was real to no one else, it was real enough to me. Cowered beneath blankets, shivering, unwilling to even blink for too long, I knew what lurked in the shadows beyond the walls. When morning broke and my mother came to wake me for school, I’d cry and throw the pillows at her, threading both hands into my hair and trying to rip it all from my scalp, banging my head against the headboard to quiet the phantoms. Only during the day could I rest without fear, chanting to myself, “It’s not real, Samantha. They can’t hurt you.”
Now, at eighteen years old, I’m crazier than ever before. I see new things. Not phantoms, but real dark creatures; monsters in the flesh without the barrier of window glass.
They are demons. Terrifying creatures. Things that prey on mankind in the night, shaped like men but darker inside than the black sky above. The wretched beings with mouths gaping open at me through windows as a child now slither through the dark streets around me, though they’re rare enough I hardly ever see them. I’m the only human who’s not oblivious. They’re so real to me. I’ve seen them, heard their voices, and even touched them. They call themselves Vespers.
And I’m madly, head-over-heels in love with one of them. 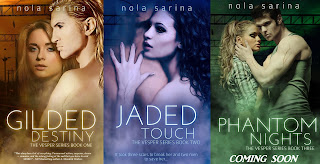